The one who is brave and kills is called a Veer

But the one who is brave, can kill yet forgives is Mahaveer. 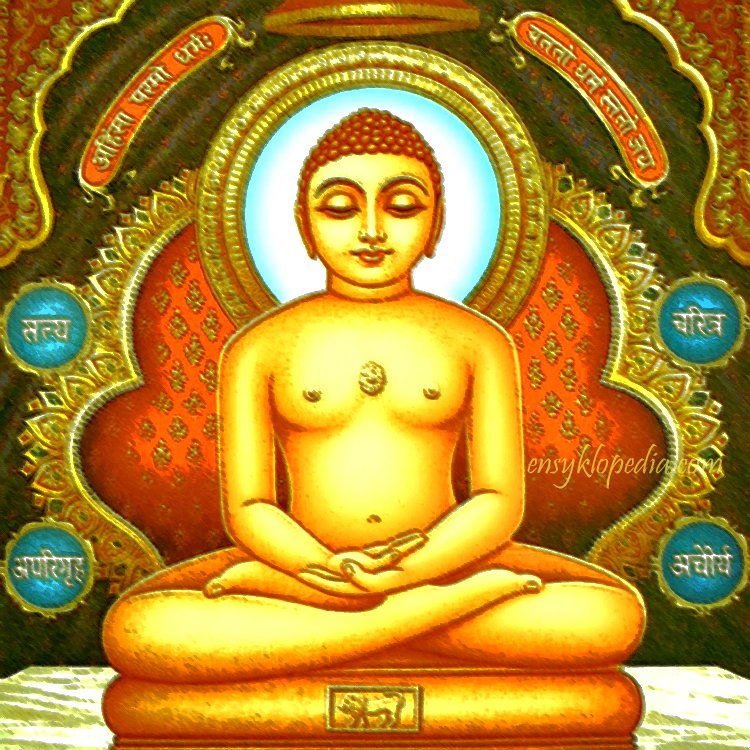 I wish all my readers a very Happy Mahaveer Jayanti.

– an apostle of Non Violence (Ahimsa)

– an apostle of Non attachment (Aparigraha)

– an apostle of Non stealing (Asteya)

– a proponent of Truthfulness (Satya)

– a proponent of Chastity (Brahmacharya)

A great soul born to King Siddhartha and Queen Trishaladevi of the Ikshvaku dynasty. He was called Vardhamaan, as his birth brought lots of wealth and name to his father’s kingdom.

He lived a prince’s life. He married Yashodhara and had a daughter from her, Priyadrashana.

He renounced life at an early age of around 30 and left all the attachments, even clothes. It is said that he took just a piece of cloth on renunciation and that too during the journey through the woods tore of and was entangled in the thorny bushes. He became “Digambara” (one whose clothes are the directions of the sky).

He performed severe penance for 12 years and attained Keval Gnan (blissful knowledge) before he gave his first Deshna. In total it is said that he gave total 55 pravachans in his life as an ascetic and He travelled the breadth and width of India. His final teachings (sermons given on the last 6 days of his life) are still studied by the munis of the Jain order.

At the age of 72, he attained Nirvana (liberation of the soul from the law of karma and life after death). A Jal Mandir exists even today in Pawapuri, in Bihar where he attained Nirvana. It is a very revered place of pilgrimage for Jains.

Let us also understand that Mahaveer did not start the Jain Dharma. He just carry forward the legacy of the 23 Teerthankara’s before him, from Adinath also known as Rishabhdev to Parshvanath. But it seems that He reached out to the masses and Jain thought came to be established as a Dharma.

Mahaveer’ s legacy was carried forward by the word of mouth by his 11 disciples called the Gandhara’s. They spread His thought far and wide. Many of His works are lost and a few which remain are a part of the Jain Agamas, which were compiled later.

It is difficult to write everything all that Bhagwaan Mahaveer did in his life in a single blog, so today will just bow down before Him.