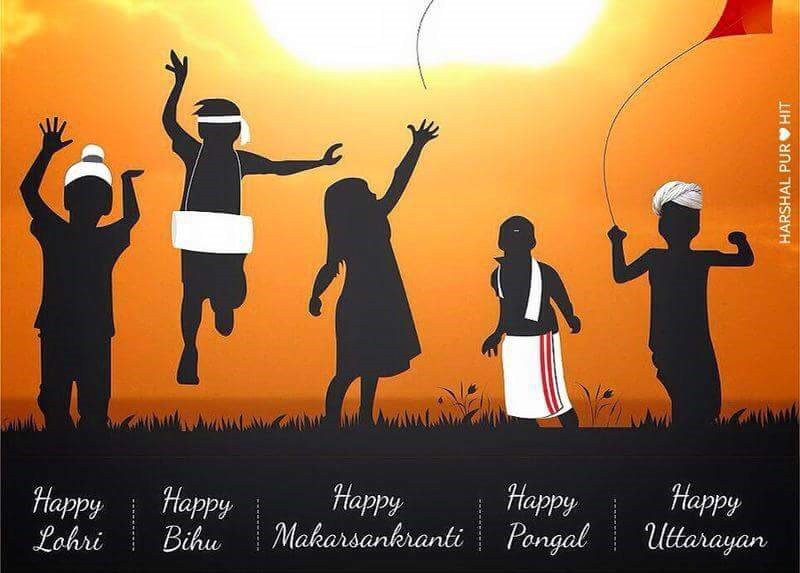 Trying to find the light…

Sankranti means the movement of the Sun from one zodiac / constellation to the next. So when the Sun enter the zodiac of Makar (Capricon) it is called Makar Sankranti.

In all, there are 12 zodiacs or constellations divided into equal segments. According to the Vedic tradition, the movement of the Sun through these zodiacs is divided into 2 equal distances i.e. 6 zodiacs each. One movement is called the Dakshinayan, the movement of the Sun towards South and Uttarayan, the movement of the Sun towards North. (If we observe the Sun rise or set everyday, we will see it rises or sets in different directions around the year). The Lord too describes the two events in Chapter 8 of His divine song, Shreemad Bhagwad Geeta.
अग्निर्ज्योतिरह: शुक्ल: षण्मासा उत्तरायणम् |
तत्र प्रयाता गच्छन्ति ब्रह्म ब्रह्मविदो जना: || 24||
धूमो रात्रिस्तथा कृष्ण: षण्मासा दक्षिणायनम् |
तत्र चान्द्रमसं ज्योतिर्योगी प्राप्य निवर्तते || 25||

(Those who know the Supreme Brahman, and who depart from this world, during the six months of the sun’s northern course, the bright fortnight of the moon, and the bright part of the day, attain the supreme destination. The practitioners of Vedic rituals, who pass away during the six months of the sun’s southern course, the dark fortnight of the moon, the time of smoke, the night, attain the celestial abodes.)

At this point, let me also clarify that Makar Sankranti and Uttarayan are two different celestial phenomenon.

Uttarayan, is movement of the Sun towards North. It begins on the 21st or 22nd of December, every year.

Let me not be too astronomical too. As it would bore you, all, my readers. But the above difference and understanding is a must for all of us. As I always use to call Makar Sankranti, Uttarayan in my younger days, till the time I came to understand the above.

Makar Sankranti is celebrated all over India, with different names.

In UP, Bihar it is celebrated as “Khichadi“.

As “Shishur Saenkraat” in the Kashmir Valley.

Makar Sankranti has it’s own set of rituals, including that of Sun worship. The people of India will descend at the Sangam Teerth, Prayagraaj (a confluence of three rivers Ganga, Yamuna and Saraswati) for a bath in the Sangam. Prayers are also offered to the Sun. This year is also the year of Ardh Kumbh (a 6 yearly congregation of all the Sadhus / saintly people of India following the Vedic tradition). A place where all get to gather and discuss the work done during last 6 years and to be done in the next 6 years. The work of Spreading the message of Vedas and instilling their thoughts in individual lives and trying to live on its principles is all reviewed here. It’s a phenomenon to be witnessed. I have never been to the Kumbh, but yes, the memories of bathing in the Ganges, at Haridwar and Hrushikesh, are still very strongly etched. The cold waters of the Ganges cleanse the mind and purifies the soul. The roar of the flowing Ganges at Hrushikesh is something to be heard and witnessed too.
In Maharashtra on Makar Sankranti day people exchange multicoloured halwa (sugar granules coated in sugar syrup) and til-gul laadoo (sweetmeats made from sesame seeds and jaggery). Gulachi poli/puran poli (गुळाची पोळी / पुरण पोळी) (flat bread stuffed with soft/shredded jaggery mixed with toasted, ground til [white sesame seeds]) and some gram flour, which has been toasted to golden in pure ghee, are offered for lunch. While exchanging til-gulas as tokens of goodwill people greet each other with the words “तिळगुळ घ्या, आणि गोड-गोड बोला (til-gul ghyaa, aani god-god bolaa” meaning ‘Accept this til-gul and utter/speak sweet words’). The underlying thought in the exchange of til-gul is to forget the past ill-feelings and hostilities and resolve to speak sweetly and remain friends. At the same time, the combination of Sesame seeds and ghee serves as a lubricant for the joints of the bones during the winter season. The sesame seeds helps create a lot of heat in human body which keeps the person active, hale and hearty.

Uttarayan, as Makar Sankranti is called in Gujarati, is a major festival in the state of Gujarat which lasts for two days. 14 January is Uttarayan. The next day is Vaasi-Uttarayan (Stale Uttarayan).

Gujarati people keenly await this festival to fly kites, called ‘patang‘. Kites for Uttarayan are made of special light-weight paper and bamboo and are mostly rhombus shaped with central spine and a single bow. The string often contains abrasives to cut down other people’s kites. Again it has it’s own climatic effects. The kite fliers with their families stay one whole day on the roof top / terraces exposing themselves to the Sun, which in turn helps synthesize Vitamin D under their skin. It does tan the skin, but the tan wears off in a few days. In the major cities of Ahmedabad, Surat, Vadodara, Rajkot, and Jamnagar the skies appear filled with thousands upon thousands of kites as people enjoy these two full days on their terraces. When people cut any kites they yell words like “kai po chhe” and “lapet lapet” in Gujarati. The lunch in the afternoon consists of Undhiyu (spicy, baked mix of winter vegetables) and chikkis (made from til (sesame seeds), peanuts and jaggery) are the special festival recipes savoured on this day. From a last few years, the state government of Gujarat has been celebrating International Kite Flying Day, during these days. Participation from different countries has been ecstatic.

The Hindu Sindhi community in western regions of India, that is also found in southeastern parts of Pakistan, celebrate Makar Sankranti as Tirmoori. On this day, parents send sweet dishes to their daughters.

The celebrations all over India have it’s own significance and will write in detail in the coming years. Will end today with the following lines sung in Northern India,

Wishing you all a very Happy Makar Sankranti and Happy Kite Flying.